The Nature of Saga 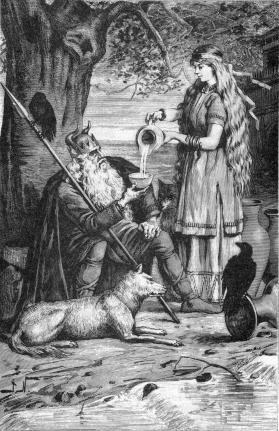 Saga is in my opinion one of the most interesting concepts introduced to us by Ebbe Kløvedal Reich (in his Grundtvig Biography).

Saga is both a goddess and style of prose, she rose to fame in the 19th century, and her name is now used in a wide variety of ways.

As a goddess she appears in Snorri’s Edda and in Grímnismál, she is one of the Asynja and her home is Søkkvabek. She is closely associated with Odin, and there are speculation that Saga is merely another name for Frigg.

The most used meaning of Saga is as a multi-episodical prose narrative in old Norse. Apparently its ancient meaning was “something that is being told”, after the introduction of writing it became a designation for any lengthy written tale, factual or fantastical, secular or religious, original or translated. These Sagas can be further divided into sub-groups, these groups can be overlapping one another depending on if you view the Sagas as historical documents, or as a literary genre.

However what I would like to focus on here is the how the Sagas were viewed during romanticism, and how the concept of Saga developed in 19th century Scandinavia.
With the emergence of romanticism in Scandinavia the Sagas once more became topical, as they were seen as popular literature and a link to the origins of the Scandinavian nations. This linked meant that the Sagas became instrumental in the creation of national identities in Denmark, Norway and Sweden. In Denmark and Sweden it was mainly the legendary sagas and the Icelanders’ sagas that received attention, where they in Norway focused on the Kings’ sagas.

Danish poets such as Adam Gottlob Oehlenschläger, Bernhard Severin Ingemann and Nikolaj Frederik Severin Grundtvig used the content of the Sagas in their poetry. One could say they intended awaken the Danes interest in the poetry and religion of their ancestors, quite a task given that they were for the most part devout Christians… It is during this period that Saga take on another form, she becomes the embodiment of Norse identity, a muse of poetry, the zeitgeist of Danish romanticism. The interest in the old Norse tales pre-dates romanticism, so maybe I should be a bit careful with linking them with one another.

To understand the authorship of Grundtvig, one has to have some understanding of his relationship with Saga. This is a complex relationship, and not one I pretend to know enough of, in order to provide an satisfactory exposition. This relationship is something Ebbe Kløvedal Reich dedicates quite a few pages on, and I have made a feeble attempt to translate some of his main points:

“To court Saga in writing, is to enter a heretical priesthood. The oldest worshippers of Saga were bards, druids and skalds, skilled within their trade. When they pronounced incantations in their strange tongues it worked, and if they cast bliss on a place, you could feel warmth and comfort decent there. Later these singers almost disappeared. Those that remained had only a vague recollection of why they were singing. Occasionally it did happen, that on behalf of their goddess they would venture forth in song-lething against the Latin church’s monotonous and pretty music always accompanied by ineffective words. Most however only sang on the sly for those that would listen, and they would in public acknowledge the triumph of Christ.

But then many centuries later, it was as if all of northern Europe rose at once and rallied behind their forgotten white goddess, against the ruling Mediterranean white Christ. Such a long time had passed that the peoples of the north did not know exactly what they were doing. They probably did not intend to tie their words to a magical cult, rather they intended to worship other gods than those of the priesthood. Therefore they did not sing, but instead they wrote, there was a lot of rubbish and lies in their songs of praise. But the Unfathomable took mercy on his blind and inept suitors and dealt good cards into their hands.

In this way a new social class appeared in  society: The artist-class, which in the beginning only included poets. They were not artisans, as they had no particular system in which to excel. They were not priests, as they opposed the dogma of the church. Yet they grew continuously more skill full, and after a short while an entire church were made ready for them: The church of poetry, paid for by their rich patrons and later by the state. The first pope of this church were Goethe, and the first herder for the Danish language were the small and pale Johannes Ewald.“