I know it is a bit late, after all the International Women’s Day was Sunday, but I am going to use the occasion to post a few photos related to womens suffrage in Denmark. 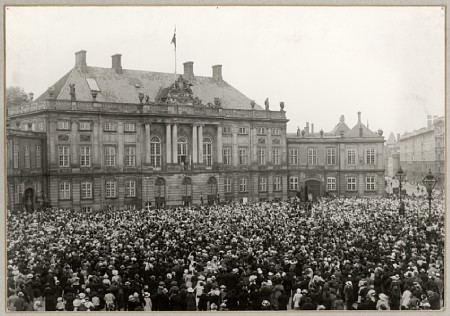 Most of these photos are taken at the great women’s march in 1915. It was the culmination of a long process, and ended in front of the Royal Amalienborg Palace as the new constitution (granting equal voting rights to women) was being signed inside.

The question of women’s suffrage was first raised in the Folketing (The lower house of the Danish parliament) by Fredrik Bajer (The Liberalist Party) in 1886, when he argued that women were given the right to vote at local elections. The pattern that would follow the next few decades was that similar suggestions would gain approval by the Folketing, only to be blocked by the Landsting (The upper house of Danish Parliament, dominated by Conservatives).

Women had of course  started organizing as well before women’s suffrage became a talking point in parliament, Dansk Kvindesamfund (Danish Women’s Society) was established in 1871 (By Bajer’s wife, Mathilde Bajer), many other organisations sprung up, and eventually the political parties would also establish female societies. It wasn’t until 1908 however, that women would be allowed to vote, and then only at local elections. It took another seven years before Sif Obel, could lead the great march towards Amalienborg Palace, where a massive crowd gathered. Here the female delegation handed over an adress to Parliament and Government where they expressed their delight over having obtained voting rights, but the word “tak” (thanks) were deliberately left out, as they had only been granted what had always been their right.